HP, What do I say

After a day of getting some things set up on the new laptop I decided to check my email. Found out the g key was broken. How I didn't find that before I don't know. I sent that one back in and now I am waiting for my second replacement from HP. Maybe I will get that one Tuesday.
Posted by Mark at November 29, 2008 No comments:

I received the new laptop yesterday and am in the process of getting everything backed up and moved and then installing the new programs. It drives me crazy how much crud they put onto a new machine. It is refurbished but they gave me a two year warranty on the machine so I don't care if it is a refurb. I hope that this week I will be back to normal editing pictures and moving along.
Posted by Mark at November 25, 2008 No comments:

Last night I attended a 1 day marketing course that was jammed into 3 hours. It was presented by Rick Avalos. He is a photographer located in Pueblo. He has 13 ideas for selling photography. His logic is that as photographers we enjoy taking pictures so why not make some money. We always want to upgrade to the next camera, lens, software, meal etc...

There was so much crammed into the seminar that there is no way I could implement all of the strategies right now. A couple things that I did learn.
There are a lot of great ideas out there. It think that maybe I am afraid that I might get started and get too busy or that I will take some bad pictures that the client does not like. I may start getting out there more and more but there is some ground work that I need to do. 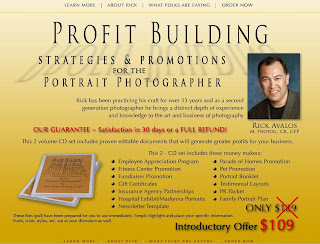 After sending in the computer twice and numerous conversations with people in India, Canada, and Colorado, here is what is happening.

HP has realized that they are not going to fix the laptop so the offered to send me a new laptop. They also have laptops they buy back from overstocked stores that they mark as refurbished. I am not sure if that is true but they offered me a year warranty with anything that I choose.

I bought a 3 year extended warranty that Staples will refund because they have not done any service on the laptop. That was the easiest part of the conversation and only took two hours.

HP says that I will be getting a new laptop that is equal or greater than the one that I have now. I should have that computer in less than a week.
Posted by Mark at November 19, 2008 No comments: Here is a quick picture from my first engagement session this last weekend. I have a couple more that I will load as the week continues. If the laptop starts working again.
Posted by Mark at November 17, 2008 No comments:

I will be getting my computer back today for the second time. I have been without it since mid October. I asked what was wrong with the computer and HP informed me they updated the BIOS. This is yet again something that I could have done at home! I have been without the laptop for a month so they could reinstall the operating system and update the BIOS. We will see what tonight holds.

I shot my first engagement session this weekend and I thought it was a blast. It helped that I am very comfortable with the couple and they are intoxicating to be around. If I get a working computer I will post some pictures.
Posted by Mark at November 17, 2008 No comments:

I will not have a computer for at least the next week so editing photos will not be a possibility. I arranged to have the laptop picked up Tuesday and it will be Friday before they have the box to me. The first time I sent in the laptop through Staples it was Sunday and I had the laptop back Friday. It is just getting longer and longer.

I purchased some remote triggers today and they should be here in a couple weeks so I can get used to using those. I am excited because hopefully I will get better at lighting.

Lastly, someone who is close to me just purchased an HP computer. I am sure that it will be fine. When they purchased their computer the sales person told them a horror story about Toshiba. Moral of the story is that everyone makes lemons. Be careful out there.
Posted by Mark at November 06, 2008 No comments:

Last Thursday (10/30/08) I received my laptop back from HP and they had reconfigured the hard drive. That it even though I told them about the errors I was receiving, DVD's not burning, and the external monitor loosing connection. When I got the laptop back I immediately looked at the diagnostic area and noticed that there were already 20 errors. This was their "fresh' install Keep in mind I had installed no new software at this point nor any new files, just started it up. This week I proceeded to setup all my files and reinstall the programs that I use.

Last night I was watching a movie and browsing the web and the output to the monitor stopped again. A 10 month old laptop should be able to play a movie and look at the net. I contacted HP about it and they want me to ship the laptop to them again! I asked why the problem was not fixed in the first place and their reply... "I assure the problem will be fixed this time."

After a long conversation with the customer service person (in India) I am sending the laptop in again. I proceeded to work on the laptop screen that evening and within an hour the machine shut off. Every time I would try to turn it back on it would buzz for a second and shut off again. I had to reset the BIOS to get the dang thing to come back on. I think it is overheating even though I am using HP's docking station.

To add insult to injury I asked the gentlemen if that series of laptop had overheating problems because I had seen reference to that on the internet. He replied..."all machines are tested and case reports reviewed before they are sent to manufacturing." Great that is real helpful.

Sorry about the rant but I will never buy an HP again. Between this piece and the one that I had to deal with at work, HP is not worth my time. I had a Toshiba for 4 years and never had any problems and would love to have it over my piece of crap now. I am going to hound them until they replace this piece and make sure that Staples will continue to cover that machine with the 3 year extended warranty.
Posted by Mark at November 05, 2008 2 comments:

Speedlite and off camera flash

I had a good friend over the other night and we played around with some speedlites. Our biggest issue that night was ignorance. We had little idea how to work the flashes, their range, or how the communication system works. Here is a little background and what I have learned.

We used the 580EX II mounted on the camera and the 430 EX as a satellite or slave flash. A couple beers, a cigar and a camera, not a great combination to learn but it was sure fun.

Some lessons we thought we leaned:
With the Canon system their manual says the flash can preform the following functions and in the following way:

Note: These apply specifically to the 580EX II
The biggest drawback of the 580EX II that I have read and experienced is the lack of a master/slave switch. To access the master/slave setting a menu must be accessed. It has been the reason that many wedding photographers have returned the flash. Right now there is no way to change from master to slave quickly.

There are other ways to fire speedlites off camera besides the flash's native system. This is an advantage because other flash/strobe units may be used. Typically the off brands are cheaper. Strobist has done many posts about using off camera flashes. Here is an article that is very useful for selecting a connection to the flash. The information here is my rendition of what I have read from many places. Pocket Wizards are very popular but also very expensive. Cactus triggers are not as reliable as PW's but they are more affordable. Those two options I will discuss in further detail.

Pocket Wizards work by using a radio signal to connect to the other PW's. They also have a great advantage because their range is 1600'. If you are just doing studion work that may not be a big seller but on a construction site it would be priceless. Each trigger can send or recieve a signal by flipping a switch. Rough cost is $360.00

Catus triggers works using a radio signal as well but there have been problems in the past with their relyability. The effective area is 10m which is considerably less than the PW. Rough cost for 1 receiver and trigger... $30.00 The range is much less and so is the cost.

Either of the above mentioned methods will have a trigger that slides into the hot shoe in the top of the camera and a receiver that plugs into the flash. The receiver will need to be connected with a PC cord or some other way.

If you are looking to experiment with off camera flash Storbist recommends going to Midwast Photo Exchange. They kits available for purchase as well.

A couple of links that I consulted
Digital Photogrphy School Forms
Strobist
Pocket Wizard
Gadget Infinity
Posted by Mark at November 04, 2008 No comments:

I received my laptoop back from HP and it still has the same problems as before. All they did was re image the hard drive. Not only did they fail to fix the problems but they erased all of my settings. 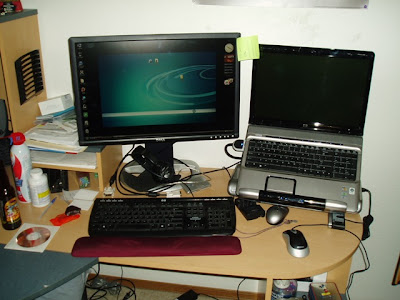 I have included a picture of how I set up the new monitor with the existing laptop and docking station. The 24" monitor is not calibrated so what I post here should represent a standard print color of sRGB.

The new desk setup is very nice because I can use both monitors if I am editing or just one if I am working on the blog or the internet. It is amazing the difference the screen can make in detail of pictures and the work flow.
Posted by Mark at November 01, 2008 No comments: